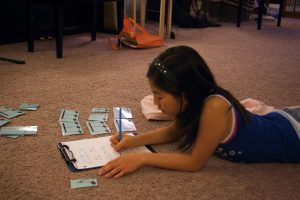 ← back to folk songs

“Can we just get to the folk song already?!”

“I organized my folk songs. I put all the ones together that I can play with chords.”

“You should write your own piano book. You know all the good songs, just don’t draw any pictures.”

“We only have 10 minutes left and we haven’t started the folk song yet!”

“I played Fuzzy Wuzzy in every key.”

“I only practice the folk songs.”

“Can I put on the headphones and figure out the do re mi’s by myself? It will be more challenging that way!”

“I transposed Dinah to g minor!”

Email: “Guess What? Did you know that today I transposed camp town races to the key of F#? I’m so proud of myself because I wasn’t very good at it at first but now I can play it very well and transpose it! :)”

“This week I played ALL my folk songs in a row!” (at that time, this student knew 32 songs)

“I drew pictures for all my folk songs.”

“I practiced Amazing Grace a LOT.”

“I organized my folk songs in alphabetical order.”

“I played Down to the Baker’s Shop over and over and drove my Grandma crazy!” 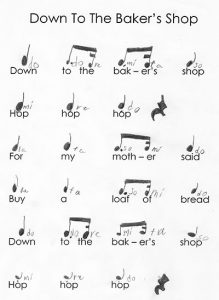 Children love rhythm patterns that look and sound “challenging.” In this song, they learn how to hear, draw, and play the dotted eighth – sixteenth note pattern.

The following quotes were from students who already knew between 50 and 70 songs.

“For a long time, you’ve only been putting assignment sheets in my notebook. There haven’t been any folk songs.”

“I wondered if we were ever going to play another folk song.”
“Can we do a folk song again? I want a real challenging one!”

I believe students are in music lessons because they want to play music, and given the proper environment, students love to learn. When teaching, I

– Focus on the skills necessary for the student to learn music on his or her own, including note-reading, ear-training, technical skills and interpretation.
– Keep students motivated by helping them choose music that they love to play, but is also within their current skill level.
– Challenge students to increase their skills by introducing them to great sounding music requiring more knowledge or technical ability than they currently have, but is within reach with a little extra effort. “If you learn the chord inversions for the key of Eb really well, you’ll be able to play this song!”
– Make sure students learn to play rhythms correctly. Also, show them why and when it is appropriate to take “artistic license” with the rhythm. Since music happens in time, timing is one of the most important expressive elements.